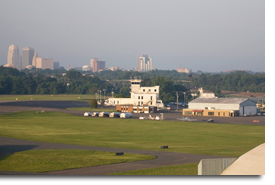 Located in Forsyth County in the Piedmont Triad region of North Carolina, Winston-Salem is well suited for business relocation and expansion.

Winston-Salem/Forsyth County is located in the Piedmont Triad region of north central North Carolina. North Carolina is the 9th most populous state in the nation, with an estimated 2018 population of 10,390,149. The state is part of the South Atlantic region, which the Census Bureau estimated having a population of over 64 million in 2017. This region is one of the fastest growing parts of the U.S.

The Piedmont Triad region is an eleven-county area of more than 1.7 million residents and is equidistant from Washington, D.C. and Atlanta. The counties that comprise this region are Alamance, Caswell, Davidson, Davie, Forsyth, Guilford, Randolph, Rockingham, Stokes, Surry and Yadkin. The urbanized core of this region is the ten-county CSA known as the Winston-Salem—Greensboro—High Point Combined Statistical Area, with a current estimated population of over 1.6 million people.

North Carolina is a right-to-work state